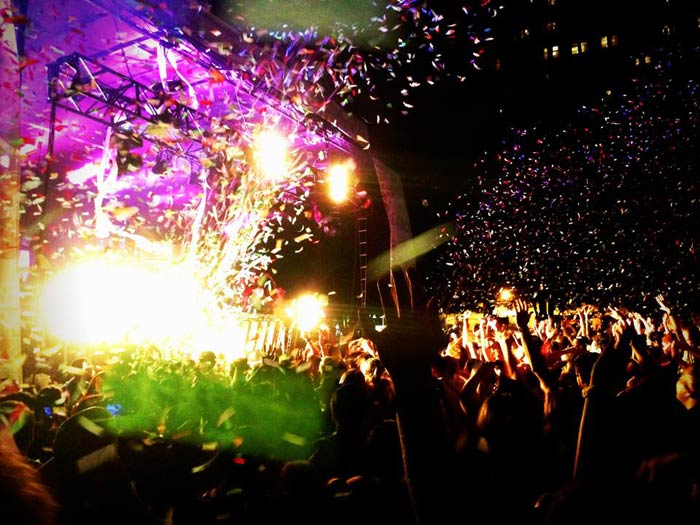 Last weekend, our little agency on 7th and J was sitting on a bass drum.

Between the LAUNCH x Fashion at the Tsakopoulos Library Galleria and LAUNCH x Music in Cesar Chavez Park, there were serious beats traveling through the airways of our grid. But, there was also something else in the air; something that resonated more clearly with us than Girl Talk’s latest mash up. There was creativity, and even better, a citywide appreciation of it.

Between Wednesday’s LAUNCH x MARRS kick off party and Imagine Dragons in Cesar Chavez Park, Sacramentans got a taste of all disciplines of art and creativity.  There was, in no particular order of impressiveness: a hanging art installation by Tapigami; the inaugural Launch Poster Series (and contest); show stopping clothing lines from world-renown Project Runway stars; pop up shops showcasing the best local art; clothing and jewelry; and even giveaways on Do 415 to draw San Franciscans up for the unique experience.

The essence of Launch is to inspire the creative class and beyond through an immersive series of events and it did just that. Whether you were the right-brained, creative professional who stopped to chuckle at Zico Coconut Water’s clever event advertising or the calculator wielding, mathematician who gawked at the cardboard architectural feat, there was something for you at the festival. Not many events can claim such wide appeal.

For us, the fifth successful year of Launch signifies something very special for our humble City of Trees: if you have a dream to inspire and be inspired, put your nose to the grindstone and make it happen. Nothing is stopping you. Instead of waiting for the next best thing to happen to Sacramento, be the next best thing. Either flex your creative muscles or support the folks who are.  Launch has started a creative movement, locally, and we’re on board.